The Heaven is on my Side

2nd of the week!
Do support us in Patreon if you are able to!


“The Heaven is on my side. The Heaven has helped me.”

Jiang Chen crossed his legs, leaned on the cliff wall and said in a relaxed manner. Everyone of them were extremely serious, yet he was relaxed. As if he was not afraid that the Fire Qilin would kill him.

“You, this fella… it looks like even the heaven is collapsing, it is still not your problem.”

At this moment, even Bai Yunfei got slightly nervous, because the Fire Qilin was too strong. A Half-Step True God like him could not help alleviate the situation and it might even cost his life if he lent a hand. Yet, Jiang Chen was so happy and confident.

“What can I do? Should I cover my face and cry? Hahaha, that is not my style. Senior Yang and the others may not necessarily lose, relax.”  Bai Yunfei rolled his eyes and said, “Your heart is damn big.“So, what are you going to do about the Dragon Ball?”

“What, what am I going to do about it? Haven’t you heard of this? Whoever got their hands on this thing will become that person’s possession.” Jiang Chen said seriously. He absolutely did not plan to give the Dragon Ball away.

But this battle will dictate where the Dragon Ball would go.

The Fire Qilin was unstoppable, 1 versus 5. Yang Jian slashed towards the head of the Fire Qilin with his weapon*. But the beast did not flinch nor evade, allowing Yang Jian’s attack to hit. However, the one who was forced back was Yang Jian due to the impact, making the place between his thumb and index to be numb.

Xue Qianying too unleashed her true technique, unleashing a powerful sword fury. But the Fire Qi Lin’s flame did not weaken at all. The flame it spew forced them back several times. One would be gravely injured if the flame managed to land on one’s body.

Zi Chen roared and transformed. He too was a peerless ferocious beast and he had a terrifying face.

“You stand no chance even if you changed into your original form, plus, you’ve lost to me once. Aren’t you conscious about it?” The Fire Qilin looked at Zi Chen coldly and with disdain.

“Legend has it that the Dragon has nine sons. To think he’s the dragon’s son Yazi. Truly eye opening.” Xue Rengang said with an ugly expression.

No matter if it was Yazi or the Fire Qilin, they both gave them a great shock.

“The Dragon’s nine sons are different from one another. But they were all ferocious, sowing chaos across the land, causing lives to perish. However, it is said that they have already perished in ancient times.” Bai Yunfei said solemnly.

“Are you saying that the nine sons of the Dragon were already extinct? Then what is he? He’s the Yazi that humans depict.” Jiang Chen frowned. The legends should be fake.

“I don’t know. But this Yazi is real and the Dragon Ball in his hand should be real too.” Bai Yunfei said quietly.

At this moment, the Fire Qilin was beating down Yang Jian and the others. With its flame covering the battlefield, those who got close to him will feel like being barbecued alive. The battle became much harder. Now, the pressure and suppression exerted by the beast became much more terrifying by the second.

“None of you are my match. Those who stand in my way shall die.”

The Fire Qilin’s prestige was fierce. The beast then launched an extremely fierce tackle that rammed and caused Zi Chen to fly backwards. Jiang Chen could somewhat feel the pain from it. The body of the Fire Qilin was very strong. No matter what attack they threw on him, the beast suffered no damage. Hence, the situation was getting much more dangerous.

But the Fire Qilin did not look down on its opponent. After all, the four of them were the creme-dela-creme of their respective sect. The beast wouldn’t have fought them if they were at their peak, because these fellows were not simple fools.

“Isn’t it too early for you to be happy?” Liao Bufan sneered.

A giant gold bell suddenly appeared.The bell rang and golden light overflowed the scene It’s as if something was devouring the sky, causing the people around to be afraid of it.

“Yes. Even though it’s an imitation. It's enough to suppress you.” Liao Bufan’s gaze was extremely cold.

This was his strongest divine toll in his arsenal. An imitation of the Eastern Emperor Bell, it only has 1:100,000 of the original bell’s strength. But it still reached the level of the divine tool, hence it should not be looked down upon. The bell rang continuously and the ear-splitting ringing enveloped the Fire Qilin.

In the end, the Fire Qilin was suppressed by the Eastern Emperor Bell. The scene shocked the others.

But the Eastern Emperor Bell suddenly began to enlarge unceasingly! In the end, the whole bell was pushed upwards and rammed onto Liao Bufan’s body, causing him to cough out blood like a flood. He had suffered a grave injury.

The Fire Qilin gigantified his body to a hundred Zhang.

At this moment, everyone’s heart sunk. This fellow is too strong.

“Even though your damned bell is pretty good, it’s impossible for it to suppress me.”

The Fire Qilin looked at the gigantic sword shadow that was slashing down towards him from the sky without fear. He then roared and used his body to withstand the attack, causing him to stagger backwards a few hundred steps.

Pity, Xiao Ying too was forced back from the recoil. He was shocked by the result.

A divine eye appeared on his forehead, eliminating and destroying everything on its line of sight. The Fire Qilin faced the attack with disdain in his eyes.

The Fire Qi Lin’s flame burned and clashed with Yang Jian. Yang Jian was barbecued by the Annihilation Flame, his Shredding Heaven Eye received a grave injury which forced him to quickly retreat.

The Annihilation Flame has covered the whole grand canyon.

The previous clash has forced him to retreat from the front lines.

Xue Qianying’s eyes sparkled as she pointed her blade towards the void. The Annihilation Flame that was covering the whole valley instantly vanished without a trace. The whole canyon was covered with ice and snow, as if the time itself was frozen. The Fire Qilin roared continuously as Xue Qianying’s freezing field managed to injure the beast, gravely. In addition with the other’s heavy attacks, the Fire Qilin too was put in a dangerous situation.

“Luckily, my body is born from the flame. Trying to freeze me? Dream on!”

TL: the weapon in question 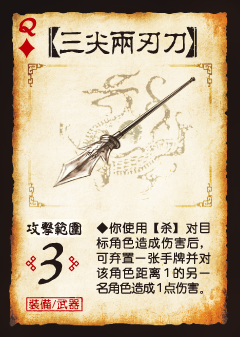 This is a card from Sanguosha (a Boardgame)

[Please support us in DMWG Patreon (DMWG Patreon) if you are able to, so that we can maintain at this rate or even release at a faster rate!]